Dark and light, light and dark... small and great, large and tiny 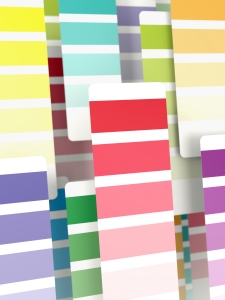 So Joelle's friend Cassandra suggested I write about my thoughts on colors. I'm game. I'm not sure what I'll write- or how The Queen may decide to use it, if he deigns to read this- but I'm going to try not to imagine that too much lol.

Color, so many meanings to color. As The Queen, Iona, and various other slaves gave me books about different sorts of paganism to read- then our minister too gave some books- I was fascinated to see how much about the use of color was in these books. All the tables of correspondences. I didn't realize how much thought went into it as Iona called the quarters, worked with the candle that she gave to my Lady Kaya before her marriage to Billy. Especially when she later told me that she didn't have any of that written out; she called out deity names as she remembered them, for instance.

One thing being The Queen's slave has taught me is how one's perspective can really change what you notice. Like there were carpet colors I didn't really notice in some rooms until I had to crawl through there. Or The Queen's hair. Those deep, dark black strands that so often act like a shield against anything but him when he's using me and is on top. Or those gorgeous blue of his eyes.

Hm, shaking myself. Well that was a moment, wasn't it? I'm not sure who needs sex more, Joelle or me. I guess it's a good thing that even color things like that still get Joelle rhapsodizing about her Master or me about The Queen. I believe there are two men who have BJs coming as soon as we can give them :D.

Thinking again about uniforms, robes, street clothes. Considering the diversity of skin tones in The Queen's stable, all the way to my pale, pale peach skin to the obsidian blackness of Mandisa's skin to the dark reddish brown of my beloved Soma's skin. Of course the blackness of the uniform is entrancing as its background of our bodies change. I think there are few things I enjoy seeing more on Soma's body than a lemon yellow night gown. Especially the silk one I bought her. The way it highlights her skin, her hair.

Shaking myself again. Gods, I am oversexed :D.

Street clothes make me think of The Queen's jeans. Mostly that standard blue denim. Although he does have a few pairs of black jeans that are such a lovely change of pace when he decides to wear those. I really like to look at the small of his back against those black jeans. The tips of his black hair reaching down toward the jeans, revealing and concealing the paleness of his skin. The smattering of his dark body hair covering his skin.

I think it's something about the dark and the light. While Joelle's Master isn't nearly as pale as The Queen, he also has dark hair. "A dark, luscious brown that makes me think of a nice cup of espresso," I think Joelle would say. And Joelle, the lucky girl, has a Master who is far closer to the idea of a "bear" from the gay community, well in his body if not his sexuality. Lovely, dark body hair. While I enjoy jeans on The Queen, she enjoys dark plaid lounge pants, especially watching them slip as her Master takes them off, baring more of his skin. Dark and the light. Opposites. Maybe it is about those opposites, like the opposite of The Queen's dominance to my submission, Joelle's attempts at controlling her chaos in response to her Master's desire for order. And something in that darkness also leads to a feeling of smallness, for both Joelle and me.
Posted by Unknown at 9:00 AM