Raven McAllan visits my blog to talk about her book "Master" 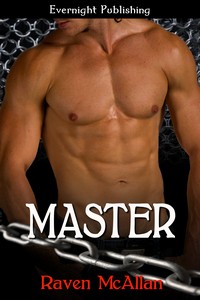 When I began to wrote Master, I had no idea it was going to be such a roller coaster ride for them or me. What I thought was going to be a straightforward short story about lost love, turned out to be nothing like it. The more the story unfolded, the more I learned the more I was pulled in. I knew I couldn't leave it as a quick light read. It was more complex.
Did I succeed in doing Caden and Anna's story Justice? I hope so, but I don't know. I gave it my all. I cried, got all hot and bothered, and at times wondered if I'd get a HEA, or even a HFN…
Whether we all—myself, Caden, Anna and those who helped them—succeeded will depend on you the readers. We gave it our best shot.
Here's the blurb…
Caden McCourt did not expect to find his estranged wife Diana at a BDSM club. When he does, the renowned Master is determined to claim back his errant wife.
When Diana left him fifteen years prior, she lost a part of herself. Seeing Cade again throws her into a tail spin.
She cannot be the sub he needs, but she can't walk away either. When she's challenged by Cade to face her demons, her old nightmares resurface. Can they overcome the chasm between them, or are the nightmares simply too strong?

And a wee tease…


"Here's the details of the guy I was telling you about." Linsey waved the document in her hand. "It's a real coup getting him to agree to guest here, I tell you. Evidently, it’s a rare occurrence when he guests. He'll be here in a day or so to look round." She handed the slim file to Anna, who took it and started to read the typed pages. The name jumped out at Anna and spots floated in front of her eyes. There was a strange ringing noise in her ears; her pulse raced, and her skin went clammy.
Oh hell, don't let me faint. Not here, not now. Let me tell her. She opened her mouth to speak, but couldn't form the words. A week, wavery croak was the best she could manage. Anna began to hyperventilate, and for the life of her couldn't stop.
"Anna, what's wrong?" Linsey pushed Anna's head down. "Take deep breaths, come on now, you're fine."
Am I? I'm not so sure. However, Anna did as Linsey told her and gradually the ringing disappeared, and her vision cleared. She gulped in air and wiped her forehead on the tissue Linsey handed to her.
"Don't move." Linsey left the office. Anna couldn't have moved if she tried. Her legs felt like jelly, and pins and needles bombarded her skin like tiny hailstones. Linsey re-entered the room and passed Anna a glass of water. "Drink it slowly and tell me what brought that on. Are you pregnant? Am I going to have to try to knit booties and have coal around for you to eat?"
That made Anna smile, albeit a somewhat small grin. "Not a snowball in hell’s chance of that. No, it's just you okayed this guy." She handed the form back, hoping her hands didn't shake.
Linsey scanned the form. "Yeah? Well, what's not to accept? I'm really over the moon with this. He's a well-respected Dom. Great form, even better credentials, and all his subs rave about him. We're honored to get him. He's very picky where he demonstrates and only does a couple of guest nights a year. He has the choice of anywhere in the world to go, and he chose to come here. I was gobsmacked, I tell you. We'd have them queuing to the border to get in if we advertised. What a coup. So, as I said, what’s not to accept? I should be genuflecting all the way to his base and back again."
Now how could she answer that?
With the truth.


If you're like me you like a bit of gen on the author, here we go…
Raven lives in Scotland, along with her husband and their two cats—their children having flown the nest—surrounded by beautiful scenery, which inspires a lot of the settings in her books.
She is used to sharing her life with the occasional deer, red squirrel, and lost tourist, to say nothing of the scourge of Scotland—the midge.
A lover of reading, she appreciates the history inside a book, and the chance to peek into the lives of those from years ago. Raven admits that she enjoys the research for her books almost as much as the writing; so much so, that sometimes she realizes she's strayed way past the information she needs to know, and not a paragraph has been added to her WIP.
Her lovely long-suffering husband is learning to love the dust bunnies, work the Aga, and be on stand-by with a glass of wine.

You can find out more about Raven here…