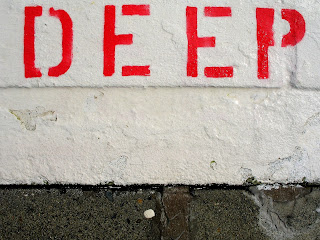 First, I want to thank Joelle for asking me to be a guest on her blog. My name is mj – well, that’s my scene name, but because the scene and lifestyle have become a significant portion of my life and most of my friends and acquaintances are also part of it, it has become my name. Even the friends I have that have made it out of the dungeon and into other parts of my life still call me mj. It’s a name I love because it represents the transformation that I underwent from a kinky, vanilla girl who didn’t know what was missing in her life, to a kinky sub who found what she was looking for.

Now – I’m no writer, but I love to write – always have. When I started playing at parties and events, I also began to write journal entries to show my online writer friends that I had become friends with. As time went on, they became less reports of what happened at the dungeon last night, to sexy stories that I hope to string together for a book one day. I get loads of encouragement from these writer friends to keep writing, as well as comments about how the scene was so hot they had to get a fan to cool off! I’ve even shown some entries to my real life friends, especially the Dom that I have been playing with for the last 10 months.

Here is part of a scene that happened a few months ago. Some of the stories are dreamily erotic and some are raunchy. I picked this for the post it is of the raunchy variety and thought as Joelle's readers, you would enjoy it. A quick setup: I am in a poly triad with my sometimes Dom, R, and his sub, A. They have been together for almost 2 years and I’m their “first addition” to their dynamic. It started with R and I doing a scene together, finding that we had an amazing connection and, well, it went from there. That’s a story all its own, but this little event happened when we were 6 months into what we like to call “the blind leading the blind” BDSM/poly sexy times.

How to describe it? It was my first time doing anything like this and this was my crazy idea. One afternoon when the three of us were fucking, I got this urge to fuck A with a strap-on. That was all well and good, R said when I told him, but "I want to watch her fuck you, I have some wicked plans.” R got that look that says what out, mj, you’re in for something new and you’ll never guess what he will be adding to a simple fucking with a strap-on.

Now, R puts himself over me in the 69 position and sticks his cock right in my mouth. Unlike A, I can deep throat like a freakin’ sex worker. I actually took a class on it at TESfest last summer. It was taught by a porn star – got lots of pointers. Anyway – back to the action - R starts to direct A in the art of fucking mj and she starts to get into a groove. R moves forward on me and I lose contact with cock; then I hear A shriek. I was like what was that? R had bitten A’s nipple and I was like – that’s all well and good, but please give me back your cock. Pushy, right? But, what doesn’t want to hear that shit?

He puts himself back in my mouth and while A is ravaging my pussy, I am going to town on R’s cock. He’s actually giving feedback: something he rarely does unless he’s about to cum. In my sex-induced haze, I’m feeling all proud of myself and shit and take him all the way down my throat. I almost gagged, but used what I learned in class to breathe threw it. Well, breathing was becoming an optional occurrence, but I was able to open my mouth wider to get some air. R will be the first one to admit that he doesn’t have the biggest cock in the world, but that makes it perfect for deep throating because it’s long enough, but narrow enough to breathe around if I really have to. Just for clarification, he doesn’t have a thing cock; I have a big fucking mouth. I’m sure I won’t hear any arguments from you all.

I feel the bed shifting and think, “crap! The implements that R used to torture my pussy are still on the bed. OMG, what else is he going to do with my poor pussy?” I’ll give the deets on the noontime pussy beating later. Suffice it to say, I was already a bit sore on the outside thanks to getting a good, solid pussy whooping. All of a sudden, I feel leather on my leg and then a thwack! His belt lands right on my clit and labia. He says, “nice benny to the strap on? I can beat mj’s pussy without landing some instrument of destruction on some guy’s poor dick.” I crack up around his cock and almost gag again. Then, *deep inhale* I hit the side of his leg for almost making me gag. It’s accompanied by a garbled, “Hey!”

He tells A to stop for a sec and twists on me and I have to release his cock again. “You didn’t just hit me, did you, mj?” All meek and shit, I say, “um, no, Sir” “Were you tapping out? Did you want my cock out of your mouth?” “Um, no, Sir. It was just that you almost made me gag cuz I was laughing.” “So, you’re saying you don’t want to laugh?” I feel like I’m getting closer to walking off a bridge willingly, but I also know he’s not very serious about this…I hope. “A, go back to fucking her, but first hand me the bat.” Don’t worry, friends, it wasn’t a full size bat! It was one of these mini jobbers made out of wood. I open my mouth to say something and he gives me the Dom look of death. I smile as pretty as I can and open my mouth to receive his cock.