Well you had to know I'd invite MJ back after that first scene she shared with us :D. Read her first scene here. All I can say is wow! 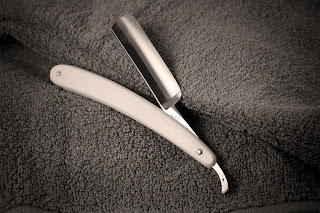 I already knew that Sunday morning sometime after brunch, R was going to shave my pussy – not clean, mind you as I’ve been growing out my pubic hair, much to my chagrin – but he was going to shape it the way that he likes. He threatened to use a straight razor and tried to make me believe that he brought one, but in the end, it was a really large and very sharp 8” chef’s knife. The scene began with me preparing my chair for him to his specifications: plastic bag over the couch cushions, a sheet then towels; I brought him a bowl of warm water, my razor with a new blade; the knife and shaving cream.

He started by binding me to the chair. He first tied my hands up and over my head so I would be leaning on them – I love this position – gets me into rope space right away. He then had me slide down in the chair to where my pussy was just at the end of the cushion and spread my legs wide so he could tie them to the arms of the chair. He bound my ankles and lower leg to my upper leg before having spreading me wide; I’d never felt so vulnerable before. By this point, I had started to breathe heavily and had gotten flush. “Are you ok, mj?” “Yes, Sir. I’m good.” I could feel my eyelids flutter open and closed; they became unfocused as he continued to bind my other leg. I was left with my legs spread eagle with my knees up, leaning on my hands.

He moved on to touching my pussy very lightly; playing with the hair and my labia; opening me up so he could look at me – he touched my slit to see how wet I was already. He looked into my eyes and asked again, “You doing ok, mj” A little breathy, I said, “Yes, Sir. I’m great.” He laughed a little and picked up the big knife. He ran the duller part of the blade through my pussy, teasing me. He then hit me with the flat of the knife and I shivered and let out a deep sigh; knives had become one of my favorite kinks. “Breathe, mj. You nervous?” He said as he leaned over me with the knifepoint just entering me. I looked him in the eyes and said, “I trust you, Sir.” He smiled and called me a good girl. I remember closing my eyes and sighing deeply again and when I opened them, he was still staring at me. He gave me an evil grin and then used the knife to cut some pubic hair with it and then put it down.

He kneeled down on a pillow in front of me and blew on my pussy. I groaned and tried to move but I was pinned down quite effectively. “Oh, no you don’t, mj” I smiled and he wiped his fingers through my pussy again and his finger came up wet with my juices. He put his finger into my mouth and sucked it in just like I’d do to his cock. I licked around his finger until it was clean. That earned me another “good girl.” He set himself to the task of shaving me and it was the most erotic thing I had ever done. He put shaving cream all around the outside of my pussy and over my pubic bone and then carefully began to shave me.

Every now and again, he’d just barely touch my clit with the razor or his finger. At one point, he woke me up out of my stupor, by grabbing my clit and rolling it around in his wet, shaving cream covered fingers. I moaned and tried to move again, but was stopped with a sharp smack to my pussy. I yelped then groaned some more. He kept working on my pussy until he seemed satisfied. He wiped me down and then asked A for her opinion. She had been sitting directly across from me reading a book while this was going. She stood up, walked over, and made a few comments, but I really wasn’t aware of their conversation. I had sunk into a blissful state of subspace and was almost completely out of it. The only thing that I tried to do was telegraph with my eyes that I didn’t want her involved. He handed her the razor, but as she was looking at an area to shave – he took it back from her and made some last minute passes. Then, out of nowhere, he hit my pussy hard. I screeched and my hips strained against the rope. He continued to slap me hard and I started screaming and gasping for air.

R smacks me again but it feels different. Harder, more of a thud instead of a crack-type sound. I realize it as I open my eyes and look up at him…he punched my pussy and I almost come right then. “Like that?” “Ohmygod, Sir. Please! More!” I see him pull his arm back a bit and thump! I gasp and scream in earnest. I’m trying to close my legs, but after each punch, I open them again asking for more. He punches me again – like rabbit punches – pop, pop, pop, pop. He stops and I’m breathing heavily; sweat pouring off of me. He leans over and I flinch as he laughs his evil laugh. “Had enough, mj?”I look back at him with an equally evil smile and pant out, “No, Sir. More please!” He crouches down in front of me and bites my inner thigh and I howl in pain; he follows it with licking my sopping wet pussy. I’m saying something; maybe I’m begging; I have no idea. All I can feel is my pussy and his hot mouth and tongue on me.

Before I know it, he has stood up again and starts to punch me – hard and fast. By now, I’ve slipped down in the chair – the ropes have slid on my wet skin, allowing more movement. He stops and tightens one leg back down and begins to taunt and tease me. I’m in heaven, so far into subspace; I feel higher than any I ever felt on the myriad of drugs I put into my system years ago. He punches and I smile, no it’s a shit-eating grin. He punches again and I try to escape again, trying to wrench my legs together and then opening them up. I feel like I could go on like this forever. I’m only feeling my pussy, then his fist. My pussy. His fist. . He stops again and leans over, “Are you done yet, mj?” “No, Sir!” I whine. “Yeah, you’re done.” “No, Sir. I can do more. I can keep going.” “I know you can, mj. But, you’re done for now.” He starts to untie my legs and I stare at my leg and the indentation that the rope made. That leg is released and I groan as I lower it. He does the other leg; I stare at the pretty design on my leg and then lower it with a creek. I’m now slouched all the way down in the chair; how I don’t fall off is a mystery to me. I’m still breathing hard and I can’t move.

I don’t remember how I sat up to let him untie my arms and hands; all I know is that I’m now slouched down in the seat again with my eyes closed – happily spinning around. “How’s your pussy feel?” I touch myself, my clit, labia, slit and pubic bone while he watches. “I think I’m ok, Sir. But, I have no idea!” I start to laugh and giggle – my usual subspace reaction, except I’m not usually feeling so physically strung out. I feel boneless and floaty. “What’s so funny, mj?” He says with a smile in his voice – my eyes are closed, so all I hear is the smile. “Well, Sir. You were just punching my pussy.” He laughs. “Yes, mj. I was punching your lovely pussy. I knew you would love it and could take it.” I purr like a kitten at his praise, “Yes, Sir. You were right. I certainly could take it.”