I first shared a snippet of this article on the Seductive Studs and Siren blog hop. Here's that link- (you can use it to continue on to my fellow hoppers that weekend)- http://joellecasteel.blogspot.com/2014/08/seductivesns-valas-bisexuality-becomes.html . What follows is the entire article: 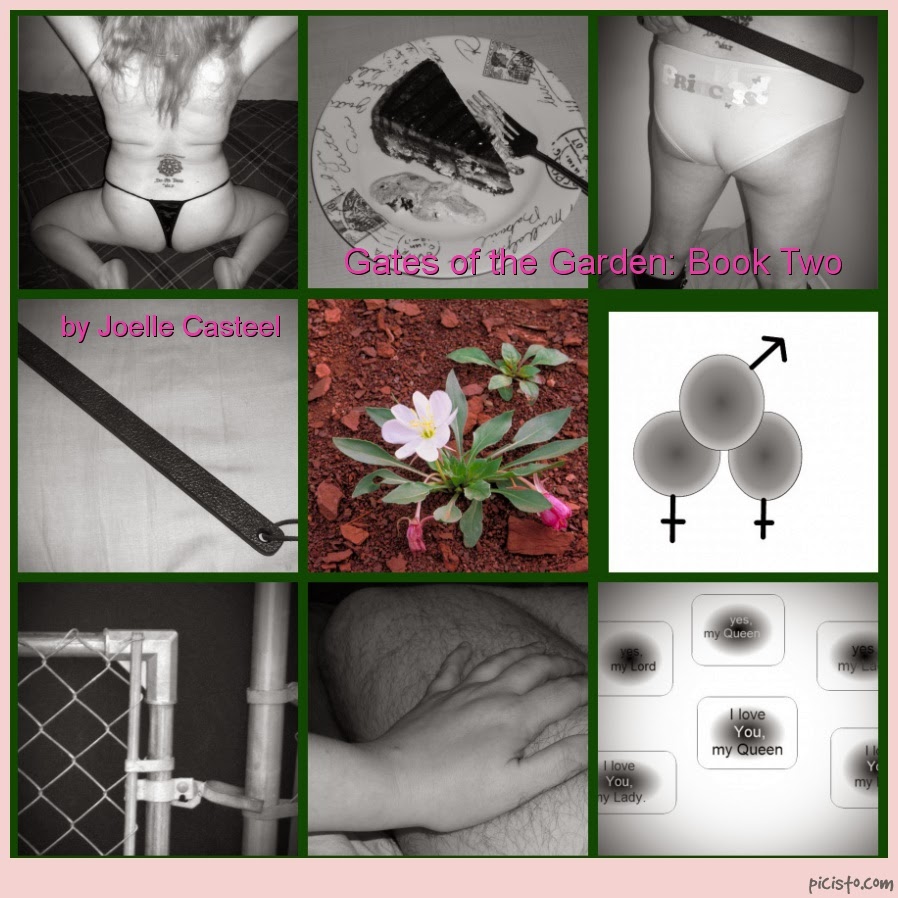 With the release of "Gates of the Garden: Book Two" of my Vala's Story serial, I had so many thoughts of what I wanted to talk about in regards the continuing story.

What does is mean to be bisexual? I've pondered this question- you see, as a 15 year old, I came out as bisexual. While my parents didn't give me any more sexual education than Vala got from her parents (although thankfully my dad wasn't/isn't a lecherous pedophile like Vala's father), I managed some of my own escape act as a teen and learned stuff they didn't care for me to learn. I don't remember what her name was, but we all called her Cat and I thought she was the most beautiful being. Her touch felt much better than many of the only slightly interested guys I did whatever with. I didn't want to stop interacting physically with guys though; I came to the term bisexual. Then I started hearing the various myths that I'd never really heard or at least recognized as "myths about bisexuality and bisexuals."

"Bisexuals are promiscuous." "Bisexuals can't be monogamous." "Bisexuals need to have sex with both men and women." "Bisexuals are just gay people who can't let go of heterosexual privilege." Those are just five common myths about bisexuals and yes, I've heard every one of them, sometimes directly to my face. I've also seen these myths taken on in academic, activist books like Julia Serrano's "Excluded." However for myself, for a variety of reasons, I've come to feel more comfortable with the identity label queer, as it's been reclaimed by the queer community.

So if I'm to share a snippet from "Gates of the Garden: Book Two" here, what do I share? Do you need to see Vala engaged in sexual activity with a man and a woman at the same time? In part, I say that her bisexuality becomes more obvious in "Gates..." because in this book, there are more times when she's involved sexually with "both" genders than she was shown in "...Night...". This question mirrors some of the difficulty in my own life, where appearances can seem to say my life is hetero-normative. Because "appearances" aren't always what they seem, I want to remind those who've enjoyed reading pieces of Vala's Story on places like my blog or are just coming to Vala's Story, The Queen is very much a male-bodied person, regardless of his seemingly feminine name.

Vala gazed into Iona's eyes. "My Lady." She adoringly returned the soft, yet forceful kisses.

The Queen moved one of Vala's hands to Iona's neck and one of Iona's hands to Vala's crotch. "That looks lovely."

Iona pressed her lips to The Queen's chest; she groaned and moved two of her fingers into Vala. "My Queen!" she gasped.

"I saw Vala's fingers touching you. Now I would see you touch her."