While The Queen raged

I can't help but stop when looking at the title of this bit of fiction- "While The Queen raged." That's what came to me when I was naming the OpenOffice file to write this bit of fiction. I was pondering what to write about for this fiction for this morning with the release of "Gates of the Garden: Book Two" fresh in my mind. It came to me that this was a chance to play at "what was happening in another part of the novel as something big was happening." In this case, the scene that struck me was The Queen losing it at Prisca when she failed to respond to his summons promptly; I'll share a snippet of that scene after the fiction, before giving you the blurb/buy links for "Gates." But there's the whole rest of the stable in the slave quarters, hearing The Queen's pounding steps, his yelling at Prisca, and I wondered what that looked like, especially as Simon gathered up a group of slaves to make breakfast, which they are shown serving in the story.

Simon blurrily opened his eyes. "What was that thumping?"

The Queen's yelling echoed through the slave quarters a moment later.

"Something's wrong." Simon frowned. "Go grab Viviana and Greta and we'll carefully head to my kitchen to make breakfast for when he's done with this weird outburst, whatever caused it."

"Yes, my Lord." Raanan gave Simon an adoring kiss before tumbling out of the bed. He spared a quick glance at Gaelan cuddled with Orlee in Tommy's bed and then hurried out of the room.

"Come on, you two. I'll need your hands and help with this too."

"Of course, my Lord," Gaelan and Orlee answered together as they followed Simon to the doorway.

Simon looked toward the stairs in time to see The Queen emerge from Prisca and Kaya's room with Prisca slung over one shoulder. He looked the other way to see Raanan emerging from Iona's room.

A moment later, Simon led his subs with him into the hallway to join Raanan and Greta. The group moved down the hall until Raanan stopped at Yiska's door and Simon ventured into Prisca and Kaya's room.

"Hey, what happened?" Simon questioned Kaya, who was sitting up in bed, holding a trembling Adan.

"The Queen summoned Prisca over the intercom, but when she still hadn't appeared minutes later, he came up here to check and found her still in bed, my Lord." Kaya kissed Adan's forehead again. "Sh, sweet girl, it's okay. Our Lord Simon'll figure things out," she cooed at the sub.

"Come here, Adan," Simon ordered. Returning his attention to Kaya, "I'm taking a few down to help make breakfast and serve The Queen and those in his room this morning. Give it maybe twenty minutes or so and then let everyone else know casual breakfast, unless I come back up to tell you to wait longer."

"Yes, my Lord." Kaya urged Ailin to lay between her legs.

Holding Adan's hand, Simon rejoined the group in the hallway. "Slowly and quietly now as we cross his room," he urged before they started down the stairway.

The Queen sat on the floor, rocking and holding Prisca.

Simon gave Adan's hand another squeeze before hurrying her out into the great room. "It'll be okay," he murmured.

Adan glanced up at Simon. "Yes, my Lord," she whimpered.

Simon lifted Adan into his arms, encouraging her to cuddle against his chest, her face on his shoulder. "Can you handle the toast, sweet?"

As the group passed into the living wing, Simon lifted his voice slightly to ask, "Anyone so hungry that they need to eat before we see about The Queen, Tommy, Iona, Prisca, and Vala?"

"No, my Lord," came the adoring response.

Simon looked down at Adan's face. "You know this isn't your fault, right? You didn't do anything to upset The Queen."

"He was holding Prisca though. And whatever she did doesn't matter right now. We're getting breakfast, we'll serve them. Won't it be good to serve them all?"

Raanan sidled up next to Simon. "My Lord, do you have a plan for this breakfast?"

Simon smiled at Raanan's obedient helpfulness. "On the hope of a formal breakfast, I had tubs of scrambled eggs prepared. Just give them a stir to bring up the meat and veggies in them before cooking them. Grab Gaelan to help you. Then Greta can cook some bacon. Viviana should collect plates, utensils, pour five glasses of milk."

"Good choice, my Lord," Greta said as she pressed a hair tie into Adan's hand. "Milk will certainly please The Queen, my Lord."

Simon gently placed Adan on her feet just inside his kitchen. "Toast six pieces of bread and then butter them. I want you to eat one and settle down some more before we serve them."

"Yes, my Lord." Adan's small frame was overwhelmed with a shudder. "As you please, my Lord."

Simon moved to one refrigerator to retrieve a fruit salad he'd made the day before. He retrieved a serving spoon and watched his submissives follow his orders. We have some time before he's calm enough and we can feed them. 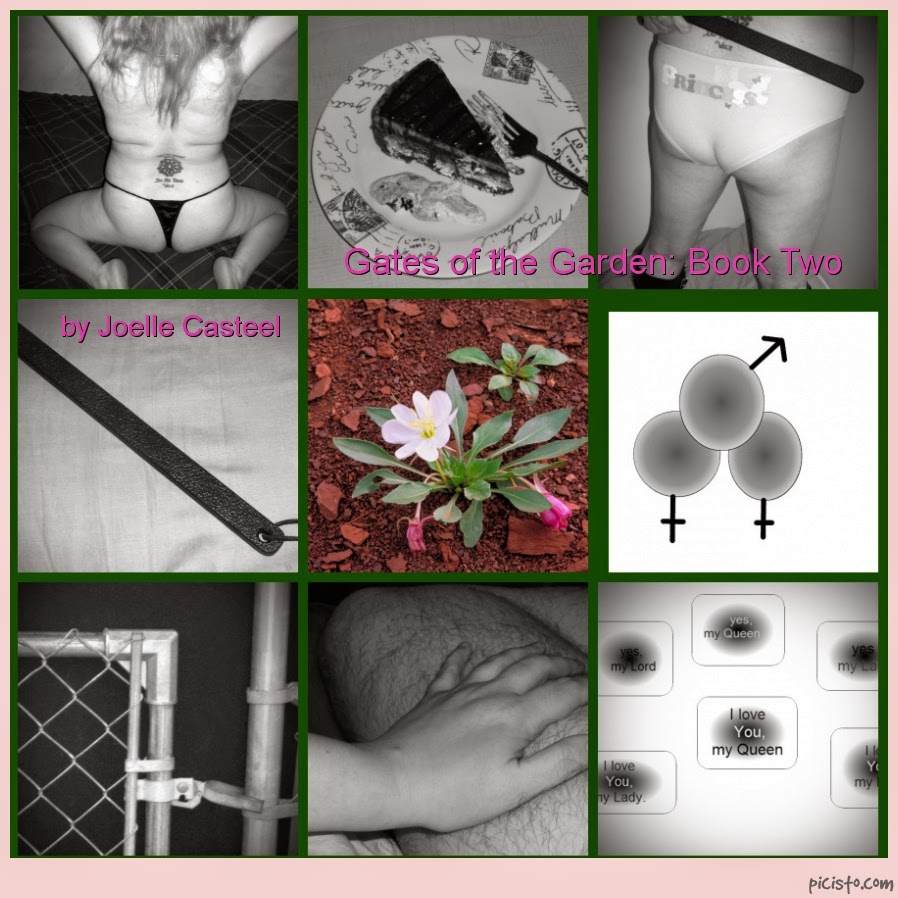 The Queen smiled. "I know." He traced her lips with his index finger. "I will be right back." He kissed her again. "And then I will give you the chance to beg for the sort of using you would best enjoy." He jumped to his feet. "Behave, my lovelies, while I fetch my tardy slave." He ran up the stairs, taking two and three at a time. He reached the top of the stairs and threw open the first door on the left.

Prisca gawked at The Queen standing in the doorway. She scrambled out of bed and fell onto her face. With awkward limbs, she went to him and jumped into submissive pose.

"Shut your fucking mouth and stand up!"

Prisca's eyes grew wide with fear and arousal. She jumped to her feet only to find herself over The Queen's shoulder. She hung limp against him, her gaze fixed on the tensed muscles of his legs. "I'm so sorry, my Queen," she whimpered against his back, desperately pressing kisses to his skin.

Without acknowledging Prisca's second attempt at an apology, The Queen stormed out of the room and slammed the door behind him.

"I didn't mean to, my Queen!" Prisca's words echoed in the stairwell as the steps flew up in her vision.