Rayanna Jamison is back with more of "The Prodigal Bride" Yay!

I just had to have Rayanna back when she was looking for places to show off her book, "The Prodigal Bride: Love Multipled Book 2"- but if you don't regularly read the WIP it up Wednesday, you'll wanna go here and check out her sharing from the next book she's penning in that series, "The Bishop's Bride." But I was proud to have suggested this snippet to her- I still gotta get my act together and review the book since I already read and loved "The Prodigal Bride." 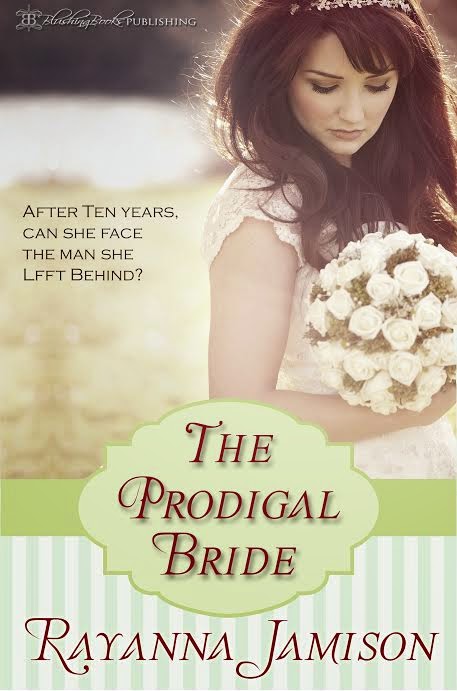 Sophia nodded in agreement. She could certainly see that that was true. "Isn't it abuse?" She had been spanked as a child, certainly, but that was discipline—and it had been few and far between. Mollie and Beth Anne were grown women that seemed to be allowing their husband, her baby brother, to hit them! She was dumbfounded at the thought, and tried to wrap her head around it as she waited for Beth Anne to answer.

Beth Anne sighed heavily, and took Sophia's hand from across the table. "No, Sophia, it's not abuse. For one thing, Mollie and I consent to it. Think about it. Did Ben grab Mollie and drag her upstairs screaming and crying?"

Sophia frowned, scrunching her eyebrows together in deep thought. Beth Anne certainly made a good point. All Ben had done was calmly request that Mollie join him upstairs. Mollie had followed him willingly. She hadn't looked terribly happy about it, but she hadn't protested. Sophia shook her head and motioned for Beth Anne to continue.

"Also, I'm a little surprised that you seem so shocked by it, honestly. It's a common way of life among families around here." Beth Anne paused and the corners of her mouth twitched a bit, as if she were trying to decide how much to say. "Most of the wives in the community are spanked wives, Sophia, and it has been like that for a long time. Probably since before we were born. Probably much longer even." Beth Anne looked as if she had more to say on the topic, but she stopped there, and switched gears. "And, Ben's not hitting us, Sophia, he's spanking us, and there's a huge difference. Hitting is done out of anger, it's not controlled, and it can be anywhere. Ben would never lay a hand on me anywhere besides my bottom, and even then, it's always with love. He's not beating me for goodness sake! Ben is always careful, and kind and loving. It's discipline, not abuse, and it's to make us better, not harm us."

Sophia's expression was sour. Although she loved her baby brother, and knew he had grown into a good man, she still wasn't a hundred percent convinced. "Discipline is for children," she insisted emphatically. "How can you consent to your husband treating you as he would a naughty child?"

Beth Anne was silent for a few minutes, her lips pressed together tightly, and Sophia worried that she had hurt her feelings. "Everyone needs to have discipline, even if it's not in the physical sense of the word. And as far as him treating me like a child, well, I just don't feel that way at all. Ben and I are equal partners, and he very much respects my role in our relationship." Beth Anne paused thoughtfully before continuing. "Obviously, I can only speak for myself and not for Mollie, but truthfully, I cannot imagine mine and Ben's relationship without that aspect. I kind of like it." She ginned conspiratorially. "It makes me feel like a lady. It makes me feel feminine and sexy. I mean, maybe not in the moment when it is happening, because it hurts like hell, and I have all these emotions, and I can't wait for him to be done, but afterwards…" Beth Anne trailed off with a shy smile before continuing. "I like what spanking does for us. I like the connection it gives us, and I like the way I feel the next day. I feel feminine, protected, and cherished. I like what it does for me in other ways as well. After Ben spanks me, it almost has a therapeutic effect. I feel calmer, centered, and more productive. Sometimes I think about asking Ben to spank me just for the stress relief." Beth Anne stopped abruptly, as if she realized she was beginning to ramble a bit.

Sophia just stared at her dumbfounded. She was still trying to wrap her mind around Beth Anne's claim about spanking being therapeutic. Sophia couldn't fathom a spanking being anything other than painful and humiliating. Yet Beth Anne spoke of it as if it was just a good workout. Maybe that's what Beth Anne needed, Sophia mused. She just needed a more acceptable way to get the same results. Sophia had taken weekly yoga classes for years before Robert had gotten sick, and it had given her all the same feelings Beth Anne was describing. She decided to suggest it. "Couldn't you just do yoga?" Sophia was enthusiastic, sure she had found a promising solution. Yoga was definitely the answer. She was honestly surprised Beth Anne hadn't thought of it. It had health benefits too, so that was an added bonus. Sophia resolved to find a local class to join as soon as possible, and to have Beth Anne and Mollie join her. She was getting more and more excited about the idea, until she saw Beth Anne's face.

For the first time since they had begun talking, Beth Anne looked truly upset. In fact, she looked like she was about to cry. Sophia instantly began looking for a way to backpedal. "I'm sorry, that came out all wrong. All I meant was—"

"It's fine, don't worry about it. I know how it sounds, Sophia. I guess it's one of those things you have to experience to understand." Beth Anne's face was drawn and her tone was short. "I hope someday you get a chance to really understand what I'm talking about. I have to work in the morning. Good night, Sophia."

Sophia Randall had no intention on returning to her home in the polygamist community she grew up when she left Hiram Jefferson just hours before their wedding. Though she cared deeply for Hiram and his family, she was young and impulsive.

Ten years, two children, and one monogamous marriage later, returning to Green Valley after the death of her husband is the only option left.

Hiram was devastated when Sophia left him at the altar. With everything already on his plate-- between his job as the district superintendent, his large family, and one sick wife, the last thing he needs is the headache of Sophia being back in town.

When his wives go behind his back and form an alliance with Sophia, what is left for him to do but show them the error of their ways with a little old fashioned discipline. But what will happen when he finds out the true reason Sophia left him in the first place?