Emily Tilton visits with her book "The Count's Discipline"

I've adored Emily Tilton's writing since I read her first red hot snippet on the Saturday Spankings blog hop. I just love Emily's unusual storytelling style. You can visit her blog at http://etiltonexplorations.blogspot.com. And don't you know that "The Count's Discipline" is on my TBR pile :D. And here it is... enjoy the excerpt :) 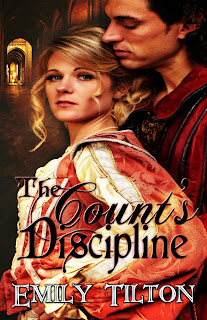 Whether it were divine providence, or blind chance, I was well-suited to the study of my letters. It was very rarely for that that I was chastised at the convent in Brionne. Rather, the regular punishments that were meted out to me were much more simply in recompense of my lowly state. The sisters had what they considered a godly belief that a girl's sins committed before her baptism were, although forgiven in that washing of holy water, nonetheless to be expiated with the convent's punishment strap to the last measure of their criminality. It may also be that knowing me to be the count's charity pupil, in an erroneous belief about his disciplinary proclivities, the sisters decided that I should be chastised well and frequently, once I had turned eighteen, the age at which at this convent, the order had decreed it was appropriate to apply the strap.

Thus I made regular trips to the punishment room in the convent after I turned eighteen as far as my birth-date could be reckoned, where the mistress of novices wielded a doubled length of leather that my bottom knew all too well. Most frequently, I was accused of sauciness, and I will confess that my tongue has nearly been my undoing many times. I can only blame my early upbringing in a place where saucy talk was by no means unknown. At any rate, by the second month of my eighteenth year, all of the least proper words in my store of the French language had been eradicated by that strap. After that, it was left to the sisters to determine from the lilt of my voice that I was being so naughty as to offer them resistance. Many was the time that a single wayward glance during the Divine office, towards a classmate, earned me my weekly set of lashes, whose outlines I explored in mixed misery in my bed at night.

[A word about the various terms Sophia uses for instruments of discipline. I don't think there's really anything unclear about the Latin, but the reader may be interested to know what the terminology is, in the original. "Lorum" is strap, a word used, in the plural, for the reins used upon a horse. "Virga" is rod, which from a description later in the private history seems to have been what we call the birch.]

You may think it strange that I say "mixed misery." Truly even by that time misery was mingled with the pleasure that I was only beginning to feel. By the time I was eighteen years of age, however, I was thoroughly a submittent, and my punishments never failed to rouse in me yearnings of which I only much later learned the nature.

When Robert de Lourcy’s wife spurns his desire to spank her, the young count contents himself with disciplining other women of the court, until a rash decision to chastise the women of a captured castle arouses the ire of the local bishop and Robert is forced to seek absolution. In an act of penance, he visits a cathedral and stumbles upon a young girl named Sophia who has been set upon by robbers. Remembering his promise make amends for his sins, Robert takes pity on the destitute child, placing her in a convent so that she may be properly educated.

When Sophia comes of age, the nuns at the convent grow more firm with her. The young woman is simultaneously drawn to their discipline but also unconvinced that their motivations are particularly noble. After Sophia’s education is complete, Robert brings her into his household to serve as his secretary. Though he has decided to never spank another woman again, when Sophia begs him to chastise her as the nuns did he cannot resist the opportunity to take her over his knee.

The two begin a happy relationship based on Sophia’s acceptance of the count’s discipline, but he remains devoted to his wife until she dies tragically in childbirth. After that sad event, Sophia expects the count to marry another noblewoman, but will that new wife be jealous and send her away? Is she doomed to be cast back onto the streets from whence she came, or will Robert break the shackles of society and wed a commoner?

Also note that this book is written with a unique style: the story is told through a modern woman who has discovered an account of the life of Robert de Lourcy which was written by his secretary and chronicler, Sophia. 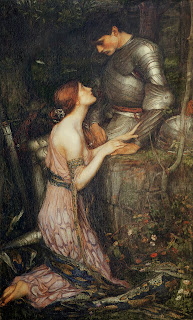 I, Emily Tilton, if I exist, am a human rights lawyer who resides in Greenwich, CT. It's more likely that I'm actually someone else, who wishes she were as free to play out her real fantasies as Emily Tilton is.