Vala wonders "What is this DD thing that Levi and Liat do?" 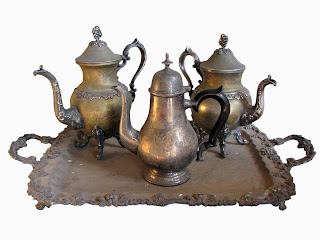 The Queen accepted a cup of tea from Vala. "Serve Levi and Liat and then sit on the floor at my feet. You may sit as you are comfortable."

"Thanks, my Queen." Vala turned away from The Queen to cross the room to the sofa where his friends Levi and Liat sat. She noticed the slightly lowered head of Liat and smiled in friendship at the submissive partner. She gingerly picked up one tea cup in her fingers and served it to Levi. She took one step and then served Liat her tea. "Sugar?"

"No thanks," Levi said and then looked to Liat. "But if you'd like some?"

Liat's sweet smile moved to Levi's face. "Thanks, Sir, but remember, I helped Simon brewing the tea? He chose an herbal tea that I prefer unsweetened."

So she addresses him as Sir? Vala thought. She placed the metal serving tray on an end table as Simon had instructed. She licked her lips as she returned to The Queen. Her gaze fastened on his gorgeously naked feet, she thought of Chitra artfully sinking to the floor and endeavored to do thus.

The Queen reached forward and placed a hand on Vala's shoulder. "Good girl," he murmured.

"Thanks, my Queen." She relaxed into his hand pushing her head onto his legs.

"So to what I do I owe the pleasure of your visit?"

"We're on our way to a marriage retreat being held in a Catskills bed and breakfast."

Vala held in a surprised gasp at Liat speaking to The Queen.

The Queen brushed his hand back and forth in a calming motion across Vala's shoulders.

"So good to be talking with a friend who understands." Levi patted Liat's leg. "A co-worker asked me what I was doing with the vacation time I was taking and when I said 'marriage retreat' he was confused as what he's seen of Liat and I together at family events, we seem to have the perfect relationship."

The Queen chuckled, the vibrations of his amusement passing into Vala. "I do not understand why so many people today think that a good relationship is something that just happens. You two put a lot of work into it."

"Work?" Liat looked down at Vala and their gazes met for a moment. "I'll never understand how you make polyamory work for you. Just looking at your stable diagrams makes me want to say all sorts of things that polyamory books, websites etcetera say are irritating."

"Thank goodness for diversity and free will."

Vala sighed when The Queen spread his legs and pinned her between them.

The Queen squeezed Vala's shoulder between his fingers for a moment until she twisted her head around to look up at his face. "Did you want to say something?"

"I've just be thinking on how different your friends here seem to be from us, my Queen." Vala paused to lick her lips. "It seems in some ways that Liat is very submissive, but there are so many ways she's not like a submissive in our family, my Queen."

Vala looked up at The Queen. "Might I please read a book about that, my Queen?"

"I shall think on that." The Queen grinned.