Guest blogger- Jaye Peaches with her book "Taught to Serve"

I love my friends visiting and so I'm excited to have Jaye share from her book "Taught to Serve." 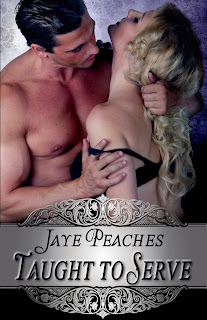 Casey is a young woman with some problems. She doesn't relate well to people and she can be a little bit bratty. Law professor Rob Tolchard is the man who takes her under his wing as his Personal Assistant when she loses her job. It is a chance encounter that leads to romance. Rob is very much a Dominant in nature, something which he accepts as part of him. Casey is not described specifically as his submissive, but it is implied in the writing that they are D/s couple.

Taught to Serve began life as short stories, each one describing a lesson with Rob as the instructor and Casey the student. Like any good teacher will tell you, lessons should generally be fun, challenging and thought provoking. Sometimes lessons happen when Casey makes mistakes and she consents to being spanked by Rob to help her remember the salient points.

The first book had a shabby, plain blue cover with words in French embossed on the cover. Casey wrote the author's name in block letters at the top of the first index card, and then, tempted as she was to open the book and look inside, she remembered to be obedient.

‘Mordre le bas dur’ was the title, and after much thumbing through the French dictionary, she translated it into ‘Bite down hard’.

She could not fathom what it meant. Bite down on what? An image flashed before her mind, andshe giggled to herself. Opening the book, she found it was a lengthy treatise with numerous photographic plates of dentures. She decided the book was about casting dental moulds. She did not think Mr Tolchard had an interest in dentistry and filed it under Medical as a subject.

The next book was older looking, and again there were no pictures. The dust cover had been removed like all the books she had been given to sort.

The title was intriguing: ‘Bottnar Upp’. It took a while to work out the language, and when she did, she was surprised to find there was a Swedish dictionary.

‘Bottoms Up’. With a silly smirk, she wrote the title down on the card next to the author. Inside were lists of wines and vineyards. It was a guide to wine tasting. She filed the book under Food and Drink.

The next book was thin and did not appear to contain many pages, almost a pamphlet. The title was enigmatically laid out in black writing: ‘Piquer le Feu’. French again, and she translated it to ‘Poking the fire’.
“Oh, come on,” she said with mock annoyance. What could it possibly be about? Another image flashed across her wayward mind. It was so easy to do, like the games she use to play with her fellow students when they were bored with their studies. Innuendo hunting had become a pastime she frequently enjoyed. After a moment of grinning, she opened the book to find numerous photographs of fireplace pokers—antique and ornate brass implements. The book was simply a record of somebody’s personal collection. She filed it under Antiques.

With mounting trepidation, she picked up the next book.

‘Sucer Doucement’. Flicking through the pages of the dictionary, she found the words and laughed out loud.

“Sucking sweetly!” she exclaimed. It was too late, the words were far too tempting to ignore. She squirmed as she remembered the last time she sucked him sweetly. For several minutes she drifted in daydreams and then opened the book. It was a guide to making boiled sweets, bon-bons, and other confectionary. Some authors had a quirky sense of humour, she decided. That one was filed under Food and Drink also.

It was becoming hard to contain herself, especially as she translated the next book from ‘Verbreiten sie Weit’ to ‘Spread them wide’.

The very words had only been spoken to her the previous evening. She quivered at the memory and stayed there for some considerable time, perched on the desk, reminiscing. The book turned out to be about law enforcement techniques.

Trying hard to write down the details with trembling hands, she heard the door behind her open. Mr Tolchard had returned to check on her progress. Straightening up, she stood by the table.

“I’ve come to inspect you, Casey,” he said walking towards her.

Though she is both beautiful and intelligent, Casey has bounced from one job to another as a result of her failure to truly apply herself. As she sits on a park bench crying after yet another dismissal, things show no sign of changing anytime soon… until a passing stranger sees the tears in her eyes and comes to her rescue. The handsome, smartly dressed man by the name of Robert informs her that he is in need of a personal assistant and she might be a good fit.
Casey soon learns that her new boss will be a demanding one, and insufficient attention to detail will earn her a trip over his knee for a bare bottom spanking. To her surprise, Rob’s firm discipline only increases her attraction to him, and their relationship quickly grows into a passionate romance. She finds that Rob can be just as firm a boyfriend as he is a boss, but even as he teaches her to submit to him completely he also shows her pleasure—and love—beyond anything she has known before.
Connect with Jaye!
My blog: jayepeaches.wordpress.com
my amazon page: amazon.com/author/jayepeaches
goodreads: https://www.goodreads.com/author/show/7142793.Jaye_Peaches