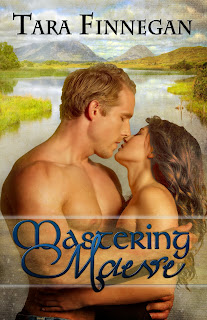 Thank you so much Joelle for allowing me to peddle my wares on your blog today. I feel like Molly Malone, the heroine in the song…

In Dublin’s Fair City
Where the girls are so pretty
I first set my eyes on sweet Molly Malone
Where she wheels her wheel barrow
On streets broad and narrow,
Crying cockles and mussels alive-alive-oh.

Times have changes a bit and the wheelbarrow is now the internet and the wares are words instead of Molly’s fish (and rumour has it also her body!!), but you get my drift…

Larry is a rancher from Texas, who came to stay in Maeve’s grandmothers hotel. It transpires that the hotel is in financial difficulty and Larry is in a position to invest in the business. In the process he and Maeve come to blows, literally, as Maeve lashes out slapping his face and Larry reciprocates by taking her across his knee for one hell of a sound spanking. A grudging respect has grown between the pair as they start to work together and recognise one another’s strengths, but part of the arrangement is that Larry will keep his hands to himself…

The scene below is set with Larry unexpectedly returning from Texas, to find Maeve coming home from a night off, late in the morning, linking arms and laughing with her friend Sean. Larry knows there is a history between them and he’s not at all happy with what he sees.

“Hello, Larry, I wasn’t expecting you. You never said you were coming… Do you remember Sean?” she asked, remembering her manners.

“Hello again, Sean,” he said coolly. “No, I was on stand-by so I couldn’t give you advance notice. Obviously you weren’t expecting me,” he said, pointedly looking at Sean and his watch.

“I had a scheduled morning off; you may check the staff roster if you wish,” she replied. “Or are you just looking for another excuse to exert your will on my behind?” she whispered just loud enough to be heard if Sean had been really listening. Luckily he wasn’t, but Larry was raging. She was deliberately goading him, making him out to be some sort of monster.

“You’re the manager; I trust you made sure the staffing levels were adequate. I don’t need to check. When you resume working I would like to make an appointment to review what happened in my absence.”

“Two p.m. would suit me,” she said with false sweetness. “Can I organise some refreshments for you, Mr Williamson? Have you been shown to your room?”

Maeve was momentarily embarrassed to recognise that Sean seemed to feel the tension, because he quickly pecked her on the cheek and said:

“Gotta run, Maeve, catch you later. Nice to see you again, Larry.” He didn’t hang around for their goodbyes. It was poor professionalism on her part, she knew.

“I believe I’m in the same room and my bag has been taken up. I was waiting here in the hope I could see you.”

“And so you have. I’ll see you again at two, unless there is something more urgent.”

“Damn, yes, there is something more urgent, why are you doing this? What can I do? You think I don’t wish I had done things differently? I’m only a man, Maeve. I make mistakes. How long are you going to punish me?”

“Would you like to continue this discussion in private?” she asked in an urgent tone. She’d already embarrassed Sean; no need to spread the tension to the receptionist or any guests lounging in the foyer.

“That might be best,” he agreed. She started to lead the way to the office, but he took her by the arm and led her towards his room. He fumbled with the key card until she took it from him and opened the door.

“Now where were we?” he asked. “Oh, yes, I remember.” Grabbing her firmly by the shoulders, he kissed her hungrily. He inhaled her sea scent and moved his hands to her behind, pulling her as close as he could, as he plunged the depths of her mouth greedily with his tongue.

“Is this what you wanted?” he asked before roughly tugging her hair to raise her mouth towards his again. She was breathless; it was rougher than she expected, but yes, she had to admit it was exactly what she wanted. Her heart was pounding, her pulse racing, and an aching desire swept to the core of her being.

“New rules, Maeve, I’m no longer keeping my hands to myself.”

Finished with college and unable to find a job in her chosen field, twenty-four year old Maeve O’Reilly saw little choice but to return to her hometown in Connemara and work in her grandmother’s hotel. Maeve has barely walked in the door, however, when she learns that the establishment is deep in debt and an American visitor is considering an investment which could be the only chance to avoid foreclosure.

That visitor turns out to be a tall, ruggedly handsome rancher by the name of Larry Williamson, a man whose dominant personality immediately puts him in conflict with the willful Maeve. When she slaps Larry across the face during a heated argument, Maeve learns to her horror that Larry is more than ready to haul her over his knee and back up his firm tone with a firm hand applied to her helpless bottom.
Larry might like to tell himself that he has chosen to move forward with the hotel investment only to avoid any legal difficulties stemming from the spanking incident, but he knows full well that there is only one thing in Ireland he is interested in right now, and that is a beautiful, feisty, sore-bottomed young lady named Maeve.

As the days pass, Maeve quickly finds her anger at Larry fading to grudging respect, and the memory of his chastisement begins to kindle a powerful need within her… a need only the arrogant, bossy Texan can satisfy. Maeve longs for Larry to strip her bare and claim her in a way no man has before, and when at last he does all she can do is beg for more. But will the wide gulf of the Atlantic and the hard realities of a long-distance romance tear the unlikely couple apart, or will they find a way to defy the odds and forge their passion into a lasting bond?

About Tara Finnegan:
Accidental writer from the west of Ireland, Tara likes to write about strong, feisty modern day heroines who meet their match with even stronger spanking heroes where the sparks will fly.

When not writing, she is a wife, mother, taxi-service, gofer and general finder of lost items!